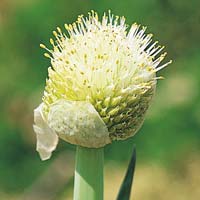 Two sets of compounds make up the majority of onion’s known active constituents—sulfur compounds, such as allyl propyl disulphide (APDS), and flavonoids, such as quercetin. Each of these groups of compounds has multiple medicinal actions.

The sulfur compounds form a strongly scented oil, particularly the compound known as thioproanal-s-oxide or lacrimatory factor. It is responsible for the tearing many people suffer while cutting onions.5 Onion and onion oil constituents have been repeatedly shown to kill various microbes in the test tube.6, 7 Studies have not been conducted in humans to determine whether onion is a useful antimicrobial agent.

APDS has been shown to block the breakdown of insulin by the liver and possibly to stimulate insulin production by the pancreas, thus increasing the amount of insulin and reducing sugar levels in the blood.8 Several uncontrolled human studies9, 10 and at least one double-blind clinical trial11 have shown that large amounts of onion can lower blood sugar levels in people with diabetes. Onion does not reduce blood sugar levels in healthy nondiabetic people.12

Sulfur compounds in onion oil have also been shown to be anti-inflammatory, both by inhibiting formation of thromboxanes and by inhibiting the action of platelet-activating factor (PAF).13, 14 Not all studies have confirmed that these actions occur in humans.15 The anti-inflammatory effect is strong enough that subcutaneous onion injections and topical onion applications inhibit skin reactions to intensely inflammatory compounds in people with or without eczema, according to the results of one double-blind study.16 Human studies have not been performed to determine whether onion would be useful in people with asthma or cough, though the anti-inflammatory action cited above suggests it might be. These actions, coupled with an ability to reduce the stickiness of platelets17 and, overall, to decrease the thickness of the blood,18 have led to interest in onion as a way to prevent or possibly reduce atherosclerosis.

Human studies have proven mixed as to whether onion is helpful for people with atherosclerosis.19 Intake of quercetin in the diet, primarily from onion, tea, and apples, has been linked to a decreased risk of having a heart attack.20 High intake of quercetin and other flavonoids from onion and other foods has been shown to decrease risk of atherosclerosis in an epidemiologic study in the United States, although the result was not considered statistically significant.21 One open clinical trial showed that a crude onion extract could lower blood pressure in some people with hypertension.22 On the whole, it is unclear whether or not onion supplements, as opposed to onions eaten as food, have a beneficial effect on heart disease.

In a preliminary study of healthy male volunteers, administration of 50 grams of raw or boiled onion prevented the rise in serum cholesterol induced by consumption of a high-fat meal.23

The evidence on cancer prevention with onion suggests a benefit for some but not necessarily for all types of cancer. Onion consumption at a level of at least half an onion a day was associated with a 50% decline in stomach cancer risk in one study.24 Higher onion intake was also correlated with lower risk of breast cancer in a French epidemiological study.25 No protective effect against colorectal cancer was seen from higher onion intake.26

Most human studies that have shown an effect from onions used at least 25 grams per day and often two to four times that amount.27, 28 Though some studies have found cooked onions acceptable, several studies suggest that onion constituents are degraded by cooking and that fresh or raw onions are probably most active.29, 30, 31, 32