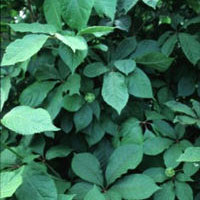 Eleuthero is an “adaptogen” (an agent that helps the body adapt to stress). It is thought to help support adrenal gland function when the body is challenged by stress.4

Eleuthero has been shown to enhance mental acuity and physical endurance without the letdown that comes with caffeinated products.5 Research has shown that eleuthero improves the use of oxygen by the exercising muscle.6 This means that a person is able to maintain aerobic exercise longer and recover from workouts more quickly. Preliminary research from Russia indicates it may be effective for this purpose.7 Other trials have been inconclusive8 or have shown no beneficial effect.9

Eleuthero may also support the body by helping the liver detoxify harmful toxins. It has shown a protective action in animal studies against chemicals such as ethanol, sodium barbital, tetanus toxoid, and chemotherapeutic agents.10 According to a test tube study eleuthero also helps protect the body during radiation exposure.11 Preliminary research in Russia has suggested that eleuthero may help alleviate side effects and help the bone marrow recover more quickly in people undergoing chemotherapy and radiation therapy for cancer.12

Eleuthero has been shown to be effective as a treatment forthe common coldwhen combined with andrographis in a formula sometimes referred to as Kan Jang.13, 14 Preliminary evidence also suggests that eleuthero may prove valuable in the long-term management of various diseases of the immune system, including HIV infection and chronic fatigue syndrome. Healthy people taking 2 teaspoons (10 ml) of tincture three times daily have been shown to have increased numbers of the immune cells (T4 lymphocytes) that have been found to decrease during HIV-infection and AIDS.15 Further human clinical trials are needed to confirm that eleuthero may be helpful for this disease.

Dried, powdered root and rhizomes, 2 to 3 grams per day, are commonly used.16 Alternatively, 300 to 400 mg per day of concentrated solid extract standardized on eleutherosides B and E can be used, as can alcohol-based extracts, 8 to 10 ml in two to three divided dosages. Kan Jang is a formula combining an andrographis extract with an eleuthero extract providing 2 to 2.4 mg eleutherosides daily. Historically, eleuthero is taken continuously for six to eight weeks, followed by a one- to two-week break before resuming.