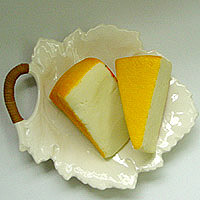 Look for Steinbuscher, from Germany, and Mondseer, from Austria.

Varieties from this region include Loo Veritable and Brigand, from Belgium, and Kernhem, from Holland.

Another semisoft Port Salut variety, this is a flavorful, pale-yellow cheese made from part-skim cows’ milk. Its orange rind is created as the cheese is polished with brine, which also contributes to its rich flavor.

Scandinavian varieties include Ridder, from Norway, which is also known as Riddar in Sweden.