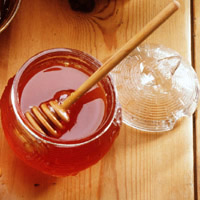 Produced in Mexico, agave is sweeter and thinnerthan honey.The juice comes from the pia, or core, of the agave. The filtered juice is heated, turning thecarbohydrates into sugars, which manufacturers claim has a low glycemic index.The syrup naturally containsiron, calcium, potassium and magnesium which contribute to the color, which can range from dark to light.

Amasake is a traditional Japanese product made by fermenting sweet brown rice into a thick liquid. It is a creamy, quickly digested beverage used by athletes after a workout or as a sweetener in cooking or baking.

Barley malt is a thick, dark, slow-digesting sweetener made from sprouted barley. It has a malt-like flavor. Some say barley malt is to beer as grapes are to wine. It is ideally suited to brewing for many reasons: Malted barley has a high complement of enzymes for converting its starch supply into simple sugars; it also contains protein, which is needed for yeast nutrition. Another important element is its flavor. Pure malt extract, which is relatively expensive, is sometimes adulterated with corn syrup, which is cheap. Barley malt extract (available in powder and liquid forms) is also used medicinally as a bulking agent to promote bowel regularity.

Brown rice syrup is a naturally processed sweetener, made from sprouted brown rice. It is thick and mild-flavored.

Date sugar is a powder made from dried, ground dates.

Also known as levulose and fruit sugar, fructose is the sweetest of all the simple sugars (e.g., glucose, fructose, galactose). Fruits contain between 1 and 7% fructose, although some fruits have much higher amounts. Fructose makes up about 40% of the dry weight of honey. It is also available in crystalline form, but its sweetness rapidly declines when dissolved in water.

Fruit juice concentrates are made by cooking down peach, pineapple, grape, and pear juices to produce a sweeter, more concentrated product. The product is then frozen to increase shelf life.

FruitSource is the brand name of a granulated sweetener made from grape juice concentrate and rice syrup.

This is the most widely distributed sugar in nature, although it seldom occurs simply as glucose. Typically, glucose is found as a component of starch and cellulose (vegetable fiber).

Honey is a sweet substance made from plant nectar (sucrose) by the honeybee. The source of the nectar determines the color, flavor, and texture of honey. Alfalfa and clover honey are the most common types, but blackberry, heather, and acacia honeys are also popular. Honey is sold in liquid or crystallized form, and is available raw or pasteurized. Commercial honey is heated to 150 to 160F (65.5 to 71C) to prevent crystallization and yeast formation. “Organic” or “raw” honey has not been heat-treated. About 40% of the sugar in honey is fructose. Honey may contain Clostridium botulinum spores, the bacterium that causes botulism. Heat treatment is not sufficient to destroy C. botulinum spores, but the high sugar content of the honey prevents the spores from germinating, thus preventing the risk of deadly botulism. Normal adults are not at risk of botulism from eating honey; however, the gastrointestinal tracts of young infants (under one year of age) may promote spore germination. For this reason, infants under one year of age should not consume honey in any form.

Maple syrup is made from the boiled sap of sugar maple trees, primarily in the Northeastern United States and Canada. The taste and color vary depending on the temperature at which the sap was boiled, and how long the sap was cooked. USDA Grade A maple syrup is the most popular grade for everyday use as a topping on pancakes, desserts, and other foods. It is usually made throughout most of the short syrup production season. Grade B syrup is generally made toward the end of the season, as the weather warms toward spring and the trees end their winter dormancy. USDA Grade B syrup is much darker and has a stronger flavor, which makes it more suitable for flavoring and cooking purposes. It is thought that this late season syrup contains more minerals. Grade C syrup is no longer an official USDA syrup grade.

Stevia is derived from a South American shrub (Stevia rebaudiana). A good quality leaf is estimated to be 300 times sweeter than cane sugar, or sucrose. Also known as “honey leaf” and yerba dulce, stevia is not absorbed through the digestive tract, and is therefore noncaloric. Although stevia adds sweetness to foods, until recently it could not be sold as a sweetener because the FDAtreated it asan unapproved food additive. However, a form has been made commercially available as a food product,in addition to stevia products sold asdietary supplements. Stevia also appears to have medicinal properties. Preliminary evidence suggests that it may lower blood pressure, prevent and reverse diabetes, and possess antiviral properties.

Sucanat is a branded ingredient made from evaporated sugar cane juice. It resembles raw sugar in appearance and taste, though it is slightly less sweet. It is considered to be less refined than raw sugar.

The information presented in the Food Guide is for informational purposes only and was created by a team of USregistered dietitians and food experts. Consult your doctor, practitioner, and/or pharmacist for any health problem and before using any supplements, making dietary changes, or before making any changes in prescribed medications. Information expires December 2022.