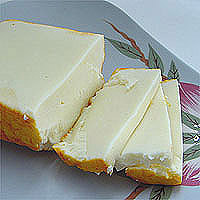 Traditional German Muenster is a washed-rind cheese made from cows’ milk; it has an orange rind and can have a strong odor and a mild to strong flavor; it is enjoyed as a table cheese.

American Muenster (sometimes called Munster) is a smooth, light-colored, semisoft cheese textured with tiny holes; it is much milder than the European varieties. Many American Muensters are made in Wisconsin.

French Muenster is known for its full, sharp flavor, its creamy consistency, and its sometimes assertive odor. Muenster is initially white and odorless; the pungent aroma develops as it is aged over the course of a month, during which the cheese is rind-washed. It is typically seasoned with anise, fennel, caraway, or cumin seeds.