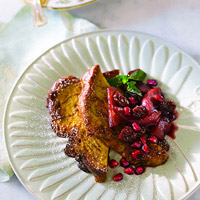 Ladle this vanilla-infused apple compote onto classic French toast—perfect for a weekend morning.

The information presented here is for informational purposes only and was created by a team of USregistered dietitians and food experts. Consult your doctor, practitioner, and/or pharmacist for any health problem and before using any supplements, making dietary changes, or before making any changes in prescribed medications. Information expires December 2022.