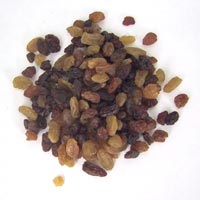 Look for plump raisins that show no signs of being overly dry or with visible sugar crystals.

The most common grapes used for raisins are Thompson seedless, Zante, and Muscat.

Both dark and golden seedless raisins (also called sultanas) are made from Thompson seedless grapes. The dark raisins are sun-dried for several weeks, which produces their dark color and shriveled appearance, whereas golden raisins have been oven-dried to avoid the darkening effect of the sunlight. Like other dried fruits, some golden raisins have been treated with sulfur dioxide to prevent darkening.

Muscat grapes create a large, dark brown, and very fruity-tasting raisin. These raisins are the variety most often used for holiday baking, such as fruitcakes.