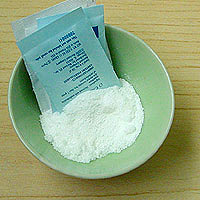 Acesulfame K (Sunette), or acesulfame potassium, was discovered in 1967 in Germany. It was approved in 1988 by the FDA as a tabletop sweetener and for use in baked goods, frozen desserts, beverages, and candies. Consisting of carbon, nitrogen, oxygen, hydrogen, sulfur, and potassium atoms, acesulfame K is 200 times sweeter than table sugar. Acesulfame K is not digested, so it contributes no calories to the diet. Some animal studies suggest a possible cancer-promoting effect.

Aspartame (NutraSweet) was discovered in 1969, and in 1981 was approved by the FDA for use in foods. Aspartame is produced from two amino acids—aspartic acid and phenylalanine—and is 180 times sweeter than sucrose. Although the FDA points to more than 100 scientific experiments that purportedly document the safety of aspartame, many consumers and scientists are not convinced that long-term daily intake of aspartame is completely safe, and are concerned about the growing number of foods that contain this ingredient. Aspartame intake is known to be dangerous for persons with phenylketonuria, a metabolic disorder that results in dangerously high blood levels of phenylalanine. In addition, aspartame is not recommended for use by pregnant or lactating women.

Saccharin (Sweet’N Low) was discovered in 1879, and is currently produced from a purified compound found in coal tar. Saccharin is 300 times sweeter than sugar, but has a slightly bitter or metallic aftertaste. It is not metabolized in the digestive tract and is excreted rapidly in the urine. As a result, saccharin does not contribute calories to the diet. Three scientific experiments in the early 1970s suggested that saccharin might be a carcinogen (cancer-causing substance) when given to rats in large doses. In response, the FDA proposed a ban on saccharin for all uses except as an over-the-counter drug. Significant public opposition to the FDA ban on saccharin ensued, prompting the FDA to pass the Saccharin Study and Labeling Act in 1977, which placed a two-year moratorium on any ban of the sweetener until further research was available. The law also required that any foods containing saccharin must carry a label that reads, “Use of this product may be hazardous to your health. This product contains saccharin which has been determined to cause cancer in laboratory animals.” Most long-term animal studies have found no cancer-causing effects from saccharin consumption. On December 15, 2000, Congress passed legislation to remove the warning label that had been required on saccharin-sweetened foods and beverages since 1977. The National Toxicology Program has removed saccharin from its list of cancer-causing substances.

Sucralose (Splenda) is derived from table sugar (sucrose). It closely resembles table sugar in taste, is highly water-soluble, and is exceptionally stable at high temperatures. In 1998, the FDA approved it as a tabletop sweetener and for use in baked goods, beverages, gelatin, and frozen dairy desserts. In 1999, FDA expanded the approved uses for sucralose, allowing it as a general-purpose sweetener for all foods. Sucralose is not absorbed from the digestive tract, so it adds no calories to consumed food. In addition, sucralose does not increase blood sugar levels. As there is very little research on sucralose use by humans, it may be advisable for people to use it in limited amounts until more is known about its long-term effects.

Equal is an artificial sweetener containing aspartame, dextrose, and maltodextrin.

Like aspartame, Alitame is made from amino acids. Alitame is 2,000 times sweeter than sugar. Pfizer, a pharmaceutical company and manufacturer of this sweetener, petitioned the FDA in 1986 for approval. As of 1992, the approval is still pending.

Cyclamate was synthesized in 1937 at the University of Illinois by a student who accidentally discovered its sweet taste. The patent for cyclamate was first purchased by DuPont and then later sold to Abbott Laboratories. In those days, Abbott’s reported interest was to use the product to mask the bitter taste of an antibiotic and a pentobarbital elixir. Cyclamate was initially marketed as tablets that were recommended for use as a tabletop sweetener for people with diabetes and others who had to restrict their intake of sugar. Although it is approved for use in many countries, cyclamate is banned in the United States due to concerns over potential carcinogenicity.