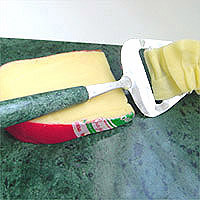 Gouda is now produced in many other countries around the world, generally by the same methods, although in some countries government regulations prohibit the use of raw milk. Look for Gouda from Australia, New Zealand, Israel, and Brazil, as well as Sweden, Norway, and other European countries.

With its intense flavor, this cheese is appropriate for shredding and grating. It is aged for 18 months and coated in black wax, which offers a sharp visual contrast to the orange cheese. Specialty Goudas may have cracked pepper, garlic, and onions, caraway or cumin seed, or nettles and other fresh herbs mixed into the curd. Aged Gouda that has been cured for two years is a rarer product, and one prized by cheese experts.

These are rare Dutch farmhousetype Gouda cheeses made from cows’ milk in 18 to 28 pound (8 to 12.6 kg) wheels. Young Boerenkass is typically aged for about four months; the aged type is cured for as long as five or seven years.

This type, also made in Holland, resembles traditional Gouda in texture and physical appearance, but has a tangier flavor.

Mass-produced in Wisconsin and New York state, this cheese is very similar to the Dutch original. It is available in wheels weighing less than a pound (450g). Today, a number of skilled American artisans also produce unusual and highly prized Goudas.