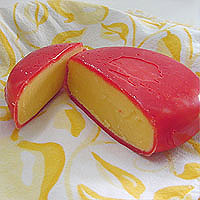 Edam is available is small portions, and also in 5 or 6 pound (2.25 to 2.7 kg) loaves; like the smaller cheeses, these are also coated with bright red paraffin to preserve freshness. Edam is now being produced on a relatively large scale in America, primarily in New York state and Wisconsin, and the U.S. variety tends to be quite similar to the cheese manufactured in Holland. Variations of Edam are produced in Germany, Finland, Spain, Portugal (there it’s called “flamengo”), and South America.

A French version of Edam, called “mimolette,” may be ripened for 6, 12, or 18 months. Notable varieties are produced in Normandy, the finest being those aged 12 to 18 months.

When the cheese has a black wax coating, it indicates that it was aged for at least 17 weeks. Some varieties are aged for as long as 10 months; the longer aging produces a flavorful cheese considered excellent for cooking.

In addition to the Edam cheese produced by bulk manufacturers, many other variations are now being made by small, artisan producers.