Tricks to Get Your Kids to Eat Healthfully 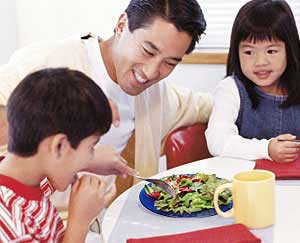 Studies have shown that life-long eating habits are formed early, and that parents have the biggest influence

If you’ve ever struggled to slip those essential fruits and veggies into your child’s diet, or you worry that your kids may actually turn into a bowl of mac ‘n’ cheese, keep reading! As a mom and naturopathic physician I have become an expert at balancing the goals of raising a healthy family with the unpredictability of daily life. While my ideals haven’t changed, I’ve had to find new, quick, and easy ways to help my family eat healthy and stay happy.

Studies have shown that life-long eating habits are formed at an early age, and that parents have the biggest influence on kids’ food choices. With that in mind, I developed these tips to make sure that my three children will grow up eating well, and will also enjoy what they eat:

When my oldest started school, she discovered all sorts of new and unhealthy snacks. Don’t try to hide things that kids love, just look for healthier alternatives like homemade fruit juice popsicles, and whole-grain or multigrain foods instead of refined flour pastas, breads, and crackers. Instead of soda, try juice diluted with carbonated water.

It’s funny: one day my kids may gobble down stems of broccoli, other days they’ll leave it to wither on the plate. We’ve found that if we keep putting a food in front of them that our kids will eventually taste, if not like, it.

We avoid making special meals for our kids by always including at least one food we know they’ll like, and making sure that “problem” foods become part of a well-liked meal. Some of our favorites: spinach and squash pured into a pasta sauce, chicken enchiladas filled with sweet peppers and zucchini, and pita pocket hummus sandwiches topped with shredded carrots and cucumbers.

We try to include a colorful blend of veggies at meal time both for nutrients and to appeal to our kids’ visual senses. A favorite trick: We set up a salad bar and have a contest to see which child can get the most colors on their plate. Try it out: shredded beets, sliced carrots, chopped purple cabbage, cauliflower florets, tomatoes, sunflower or pumpkin seeds, cucumbers, bell pepper slices, dried cranberries, and a couple of different dressings.

Look out for taste triggers

Pay attention to what your kids like. One of ours likes vinegar, another likes sweet. While it may seem hard to please them both, it can be easier than you think. Cooked carrots release the sugars to make them sweeter, but a sprinkle of vinegar after cooking can add a bit of sour.

When at the store, let the kids manage the produce part of the shopping list—challenge them to pick the freshest, best they can find. Even if it takes a little more time, invite kids into the kitchen to chop, spread, strain, or simply put the food on plates. We also started trying variations on favorite foods, which we write down as special family recipes. Jump in with something easy and tasty: build smoothies together using a variety of frozen fruits, 100% fruit juices, soy or rice milks, and low-fat yogurts. When you find the perfect blend, write it down and later let your kids make their own.

Nicole Pierce, ND, is a mother of three who enjoys reading magazines and dreaming about the elaborate meals she will cook once her children are all in school.