Snacking and Portion Size a Key Factor in Weight Control 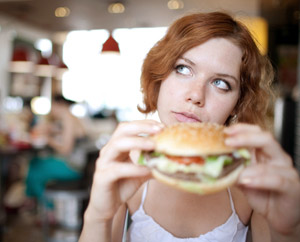 The record-breaking rates of obesity in the developed world are old news, but the culprits remain at large. Why are we still so fat? The results from one study lay a large part of the blame on two bad habits: overly frequent snacking and eating large portions.

Decades of data on food and calorie intake

The study, published in the Public Library of Science’s journal PLoS Medicine, looked at data from large food surveys done in the US since the 1970s:

Researchers aimed to identify the relative contributions of increased calorie density of foods, increased portion sizes, and increased number of eating occasions (meals and snacks) per day on the increase in total daily calorie intake over the decades.

Changes in calorie density of foods had little effect on total daily calorie intake during the 30-year study period. The following were much more influential:

“These findings suggest that efforts to prevent obesity among US adults (and among adults in other developed countries) should focus on reducing the number of meals and snacks people consume during the day,” the study’s authors said.

The only way to lose weight is to burn more calories than you take in, so the best way to shift the balance toward weight loss is to reduce your calories and boost your physical activity. Based on these findings, one place to look for extra calories to cut is in your snacks. Here are some strategies for reducing snacking: