Raise a Glass to Heart Health 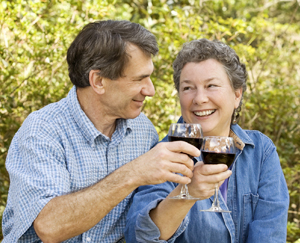 For people who don’t have easy access to fatty fish or who cannot eat it for any reason, drinking wine moderately may offer comparable benefits

It’s been a few decades since scientists told us the surprising news that moderate amounts of alcohol was good for the heart, but the reasons for its benefits have remained unclear. Findings from at least one study suggest one possible reason: people who drink wine might have higher levels of heart-healthy omega-3 fatty acids, even if they don’t eat many of the foods that contain them.

Omega-3 fatty acids from fish—EPA (eicosapentaenoic acid) and DHA (docosahexaenoic acid)—are known to reduce cardiac risk. The fact that eating fish and drinking alcohol have similar cardiovascular effects has led researchers to wonder if these substances might be working together.

About half of the men in the study were instructed to eat a Mediterranean-style diet, rich in alpha-linolenic acid (ALA), some of which the body is able to convert to EPA and DHA. The other half were instructed to eat a Western-style diet, which is typically low in ALA. Men in both groups ate about the same amount of fish. Both groups kept track of the amount of alcohol they drank, which was almost exclusively wine.

According to the study’s lead author, Dr. Michel de Lorgeril, the Mediterranean diet has many important characteristics, one of which is that it is rich in ALA. He cited several sources of this heart-healthy fatty acid:

Other characteristics of a Mediterranean-style diet, Dr. de Lorgeril said, include eating a diet that is:

For people who don’t have easy access to fatty fish or who cannot eat it for any reason, drinking wine moderately may offer comparable benefits, according to the study’s authors. Whether or not fish is on the dinner menu tonight, adding a glass of wine may be one way to do your heart good.

(Am Heart J 2008;155:17581)
Maureen Williams, ND, received her bachelor’s degree from the University of Pennsylvania and her Doctorate of Naturopathic Medicine from Bastyr University in Seattle, WA. She has a private practice in Quechee, VT, and does extensive work with traditional herbal medicine in Guatemala and Honduras. Dr. Williams is a regular contributor to TraceGains Newswire.