Kick the Soda Habit with Kombucha

The healthful new way to curb your craving
By
Sara Lovelady 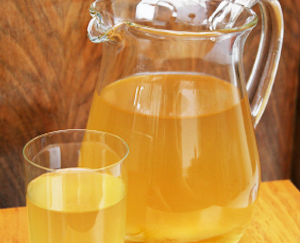 If you’re a sweet-and-sour fan, kombucha may be your new favorite drink

Lots of people love the sweet carbonated taste of soda. According to the Beverage Marketing Group, the average American drinks 19 ounces of the stuff every day. Unfortunately, sodas—both mainstream and natural varieties—are packed with sugar and calories that can contribute to weight gain. The good news is that if you’re trying to kick the soda habit, you don’t have to give up the zest of carbonation or the sweetness of sugar. Instead, try kombucha.

Kombucha is a naturally fermented tea that you can buy in ready-to-drink bottles. Through the fermentation process, some of the carbohydrates contained within the tea are converted into carbon dioxide. So kombucha delivers the same carbonated blast that soda does.

It tastes tart (from the fermentation) and sweet (from the addition of fruit juice or sugar). If you’re a sweet-and-sour fan, kombucha may be your new favorite drink.

Kombucha contains only a fraction of the sugar and calories of soda. How much depends on whether you choose fruit juicesweetened kombucha, which falls on the low end of the scale, or sugar-sweetened, which falls on the high end. But either way, kombucha’s got soda beat. Just look at the numbers:

Switch out your daily 20-ounce soda for 20 ounces of low-sugar kombucha and that might add up to losing a whopping 20 pounds over the course of a year!

Does it have other health benefits?

Not only can kombucha help you cut calories, but it may have health benefits. Because its fermentation is caused by bacteria and yeast, kombucha is considered probiotic. (Look for unpasteurized or “raw” kombucha; heat destroys probiotics.) Studies have shown that probiotics such as acidophilus found in yogurt help aid digestion. Kombucha manufacturers and advocates claim similar digestive and other health benefits, though these have not yet been shown in research.

Susan Beck, Ph.D., L. Ac., CNS, a certified nutrition specialist with a focus on oncology, has only two cautions about drinking kombucha. First, don’t make your own; there have been several incidences of food poisoning linked to home-brewed kombucha. Second, don’t believe manufacturers’ claims that kombucha can cure cancer. “I have never seen any research that substantiates any of the cancer claims made for kombucha,” says Beck.