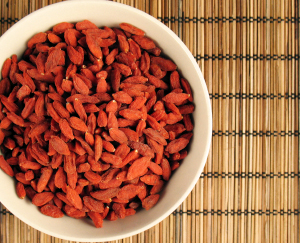 Whether eaten by the handful or tossed into salads and smoothies, goji berries are versatile and tasty with a tangysweet flavor

Prized for their remarkable quantities of nutrients and antioxidants, goji berries have been important in traditional Chinese medicine for nearly 2,000 years. Westerners love the berries in juice, smoothies, trail mix, cookies, or simply as a snack.

An old Chinese tale told a village where people never got sick. A bush with spreading vines grew beside the village well, dropping its berries into the water. Village elders determined the berries added healthful elements to the drinking water, keeping everyone healthy. Whether this was the first clue to the goji berry’s vast nutritional resources is unknown, but it’s certain that gojis are positively packed with nutrients and phytochemicals.

In traditional Chinese medicine, goji berries are believed to enhance a person’s longevity, build strength, and aid sexual potency. Research has yet to confirm any health claims with regard to goji berries, and some foreign sources of the berry show pesticide contamination, but the little fruit is generally considered a superfood, as it is a rich source of:

Easy tips to get more goji

Are goji berries the new raisin? Naturally dried and delicious, the small, chewy redorange berries taste like a cross between cranberries and cherries. Whether eaten by the handful or tossed into salads and smoothies, goji berries are versatile and tasty with a tangysweet flavor. While there is no prescribed daily amount, a small handful or 1/4cup (approximately 40 grams) is considered an average portion.