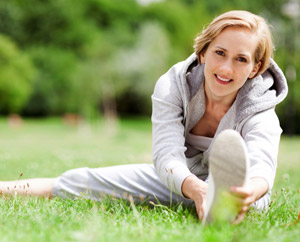 The cartilage that cushions the movement of bones where they meet as joints is mostly made of a protein called type II collagen. According to a preliminary study published in the Journal of the International Society of Sports Nutrition, supplementing with unprocessed (undenatured) type II collagen may improve knee movement and reduce pain in healthy people with exercise-related knee pain.

The nature of collagen supplements

Undenatured type II collagen is different from other cartilage-supportive supplements like glucosamine and chondroiton (parts of other complex molecules found in cartilage and other connective tissues), and gelatin, which is collagen that has been broken down into smaller molecules through a chemical process called hydrolysis. Previous research suggests that collagen supplements might help people with various types of arthritis.

The 46 participants in the study had no evidence of arthritis or knee pain at rest but reported knee pain after ten minutes of stair climbing in a lab setting. They were given either 40 mg of undenatured type II collagen per day or placebo for 120 days.

Tests were done to measure the range of motion in their knees and the length of time they could stair climb before experiencing pain at the beginning of the study, after seven days, and then at 30-day intervals. These tests showed the following:

The study authors report, “In the present study, we show for the first time that undenatured type II collagen can improve joint function in healthy subjects undergoing strenuous physical exercise.” They suggest that the benefits of collagen supplementation might be due to changes in inflammatory activity in joints resulting in enhanced tissue repair and decreased inflammatory damage.

Because this study was funded by the manufacturer of the collagen supplement, and several of the investigators work for the company, the possibility that these results were influenced by researcher bias cannot be ruled out. Nevertheless, they can be considered preliminary evidence and grounds for future research.

Weight-bearing joints, like the knees, hips, and spine, inevitably undergo some breakdown as we age, and osteoarthritis of the knee is one of the most common ailments in seniors. If you’re starting to show signs of joint wear and tear, here are some things that might slow it down: