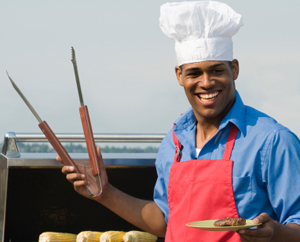 In addition to enhancing meat’s flavor and keeping it juicy, marinades reduce the formation of cancer-causing compounds in browned meats

A favorite summer pastime—cooking meats on the outdoor grill—is also known to cause carcinogenic HCAs (heterocyclic amines) to form. So this report will be welcome to backyard gourmets everywhere: in addition to enhancing meat’s flavor and keeping it juicy, marinades reduce the formation of cancer-causing compounds in browned meats.

While studying food science at Kansas State University, Doctor Fariba Emamgholizadeh, MD marinated steaks with three different commercial marinades one hour before grilling them at 400F and compared them to similarly grilled unmarinated steak. In the marinated steaks, HCA levels were reduced an average of 71%. The doctor also found that using only the bases of the same marinades (without any herbs or spices) did not have the same protective effect.

HCAs are produced by a chemical reaction between the particular molecules found in animal muscle when they are heated. High cooking temperatures and long cooking times are associated with higher HCA levels. Frying, broiling, and grilling produce more HCAs than lower temperature cooking methods like baking and oven roasting, while boiling and poaching produce the lowest amounts. A piece of well-done meat can have as many as ten times more HCAs than meat cooked rare.

HCAs have been detected in all kinds of meats—beef, lamb, pork, chicken, and fish—especially those that have been grilled, fried, or roasted. According to the National Cancer Institute, studies have linked high intake of well-done fried or barbequed meats with increased risks of colorectal, stomach, pancreatic, and breast cancers.

Previous studies have similarly found that using marinades made from a combination of oil, salt, sugar, and a variety of herbs and spices reduced the amounts of HCAs in grilled meats. Rosemary, thyme, oregano and sage have all been found to dramatically reduce HCA production in cooking meats, as has virgin olive oil alone. The powerful antioxidants found in these marinade ingredients are believed to contribute to their anti-HCA effect.

“We demonstrated that marinating meats in solutions rich in antioxidants before grilling reduced potential hazards to human health,” Dr. Emamgholizadeh said in his report. “This study suggests that marinating steaks with different commercial marinades can offer a practical way to reduce the formation of HCAs.”